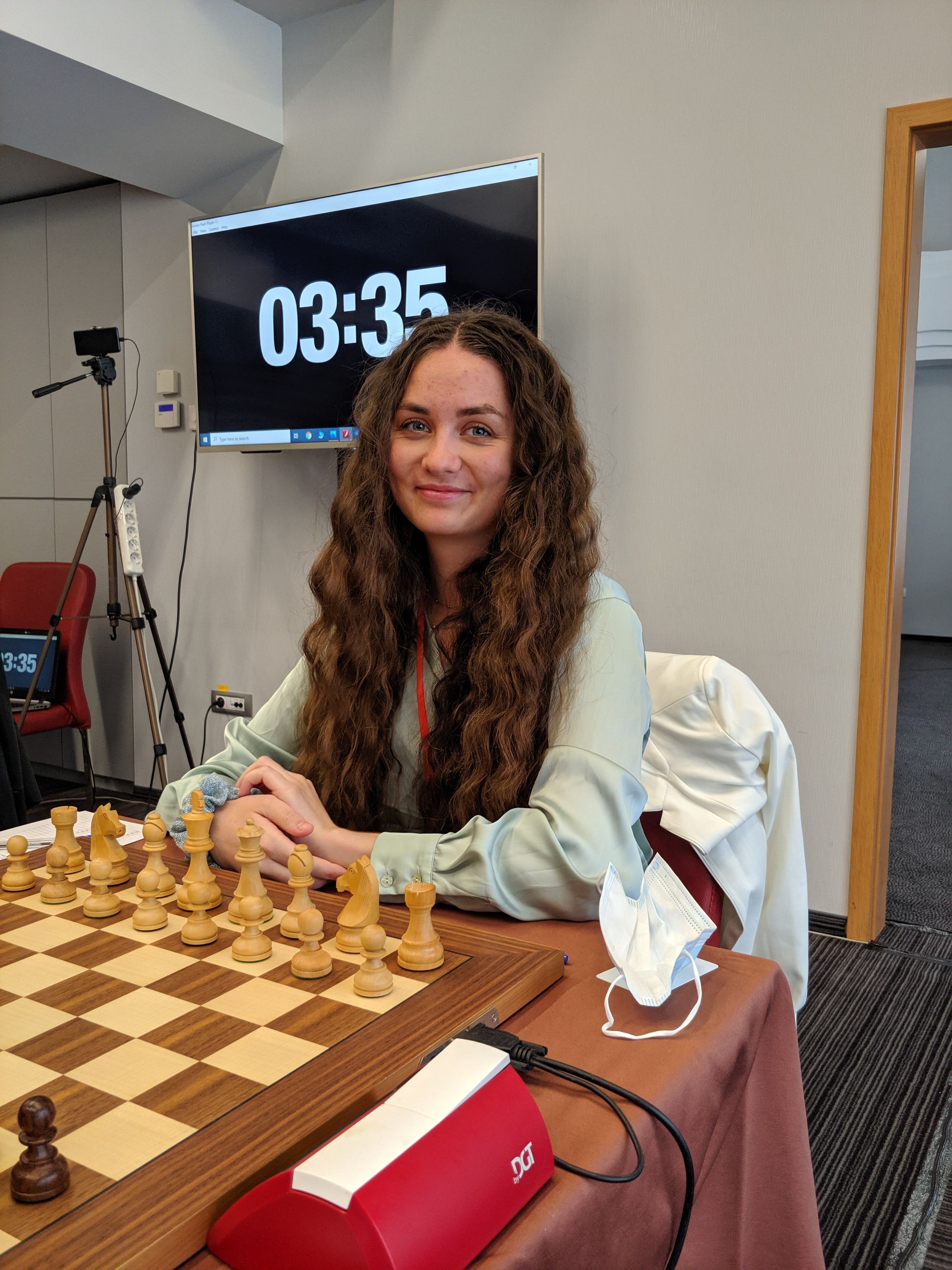 I have now spent 32 days of chess away from home of which 13 of them were at the European Women’s Chess Championship. I think it’s fairly safe to say that it has been my most intense and serious tournament ever, also resulting in it being a rollercoaster of emotions. However, no matter how hard it felt at times, I always did my best to have a positive attitude and lift the spirits of my friends when things got tough. We all agreed that it’s important to be the sunshine you want to see in the world.

I have played enough 11 round tournaments to know that anything can happen in them, but still not enough to have realised how energy-draining they actually are. Luckily, when you do what you love, you never work a day in your life. My everyday schedule got more and more difficult to maintain as the tournament got into the later rounds, so even though my alarm was set for 9 am every day, I certainly did not get up at that time. I’d usually try to make it to breakfast at around 09:30 am so that I could start preparing around or a bit after 10 am - but as mentioned before, this time got pushed a little more every day, and only halfway through the tournament I had to surrender to the fact that preparations didn’t begin until (in some cases at least) 10:30 am. It’s always a good idea to choose your moves carefully, in chess as in life, but I should probably have proceeded with a bit more caution when it came to my preparations. A term I personally have certainly never been familiar with is “over-prepping” (over-preparing), but in tournaments like these with the rounds starting at 3 pm and everyone doing their best to come out on top in the game, it’s impossible not to be scared of what your opponent might have in store for exactly you. It would require a lot of confidence to walk to the game without feeling like you have a good idea of what will happen. This meant that my preparation would go on with, of course, a few breaks until 1 pm where it was time to go for lunch. At 2 pm, I’d usually have made it to my room and gotten dressed up for the round. That left a bit less than an hour of final preparations before the game began so as to freshen up lines and make sure nothing was missed. After the game, I would go for a run, either in the hotel’s modest gym or in the lukewarm streets of Iasi. When getting back from the run it would sometimes be quite late already, which meant that it wasn’t always I managed to take a shower before dinner and the daily walk to the castle and back. The walk would often include a dessert of either a cookie milkshake, ice cream, or cake, and it would always include perfect company. Something I didn’t realise until late in the event was that I at most times was the by far lowest-rated person in the group. However, something I have always been taught is that you should surround yourself with people who are only going to lift you higher, and I have to think that high-rated company can only teach me something new.

A daily schedule like this quickly got quite exhausting but I still somehow managed to walk into the well-needed free day with a plus one score (having won one more game than I had lost). As shown in an earlier post, my opponent in the 6th round had been so kind as to offer me a free piece quite early in the game, but I guess we create our own luck. Especially in chess, even if you are on the right track, you will get run over if you just sit there. At the board, I definitely wasn’t just sitting, but if it was the free day that ruined my rhythm or if it was just because chess is extremely difficult, I will probably never know. Either way, I ended up losing the next three games which was a bit of a punch in the stomach. Even in the 9th game, having lost two games in a row, I could make a WIM-norm by beating the little sister of world top player Shakhriyar Mamedyarov, WGM Turkan Mamedjarova. Funnily enough, I had played and won a nice game against their older sister, WGM Zeinab Mamedjarova, in the second round(!), but the little sister proved too strong and my play too weak which ultimately lead to defeat (yes, I made that rhyme on purpose). After the game, the words it ain't about how hard you hit. It's about how hard you can get hit and keep moving forward, were echoing in my head but to little use for my mental state of mind. It was difficult for me to bring my heart to the 10th game that after a peaceful result meant that I could no longer score a norm. Experience is what you get when you don’t get what you wanted, are some clever words that I have been clinging on to for maybe a bit too much time at this point, but luckily every day is a new day and I managed to finish strongly with a win in the 11thand last game of the tournament.

Going home from the tournament was a long trip with transfer to the airport at 03:30 am and with an almost 10-hour layover in Bucharest airport before flying to Copenhagen. It didn’t at all feel like 10 hours as I had great company both by friends – and as we hadn’t had enough of chess already, we got a few blitz games in – as well as my always-reliant companion, Netflix. Luckily, I managed to sleep the entire way on the flight to Copenhagen and also got home safely.

During my two gap years of chess, I have often thought about how much I wish I either started playing chess earlier in my life or how I should have worked more on it when I was younger. I have also heard many others sympathise with this point of view but, unfortunately, you can’t go back and change the beginning. However, it’s a good thing that you can start where you are and change the ending because it’s never too late to learn anything. It’s been two years of many ups and downs, and being completely honest – even though it has been two incredible years that I would definitely repeat if I had the chance – it has felt mostly like downs. A chess-istential crisis here and there and having been told maybe one too many times that we learn little from victory, much from defeat, I have many times found myself wondering if it was really worth it. However, no matter how down I have felt, I have somehow always managed to find myself back behind the wooden board with the 64 carved pieces. In the two years, I seem to have learned a lot more than chess from chess. It’s a long list that would take too much time writing down, but an honourable mention goes to learning to love the process, the dedication, the hard work, planning, and consistency. These are virtues that will help me in chess as in life, and it’s important to remember that it does not matter how slowly you go, so long as you don’t stop. Something I definitely do not intend to do is to stop – I have learned that I am way too stubborn and love chess too much for this. As to Karpov as to me chess is everything, art, science, and sport, but more importantly as Fischer said: